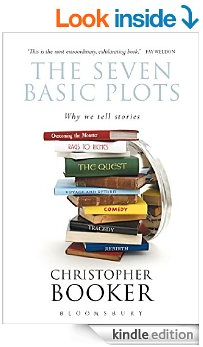 According to different sources, there are only seven (or six, five, 20, 36… or three or one) basic plots (or themes) in all of literature. Here they are:

In the 18th Century, Italian playwright Carlos Gozzi identified 36 plots or situations in fiction, which includes: 1) supplication (in which the supplicant must beg something from power in authority), 2) deliverance, 3) crime pursued by vengeance, 4) vengeance taken for kin upon kin, 5) pursuit, 6) disaster, 7) falling prey to cruelty/misfortune, 8) revolt, 9) daring enterprise, 10) abduction, 11) the enigma, 12) obtaining, 13) enmity of kin, 14) rivalry of kin, 15) murderous adultery, 16) madness, 17) fatal imprudence, 18) involuntary crimes of love (e.g.: discovery that one has married one’s mother, sister, etc), 19) slaying of kin unrecognised, 20) self-sacrifice for an ideal, 21) self-sacrifice for kin, 22) all sacrificed for passion, 23) necessity of sacrificing loved ones, 24) rivalry of superior vs. inferior, 25) adultery, 26) crimes of love, 27) discovery of the dishonour of a loved one, 28) obstacles to love, 29) an enemy loved, 30) ambition, 31) conflict with a god, 32) mistaken jealousy, 33) erroneous judgment, 34) remorse, 35) recovery of a lost one and 36) loss of loved ones.

So it seems that the number of possible basic plots is going down with Christopher Booker’s book The Seven Basic Plots: Why We Tell Stories.

And indeed, recently Matthew Jockers (the University of Nebraska) analysed 40,000 novels using a computer program that looked at emotional journey on which novels take their readers and claims there are just SIX possible storylines in just two categories:
1. ‘man on a hill’ – 54 per cent of books – is a positive story with mid-way peak and
2. ‘man in a hole’ sees characters plunge into trouble and crawl out again
broken down into three sub-groups of a roller coaster of emotions (based on syuzhet, a term coined by the Russian formalist Vladimir Propp). Read more about six basic plots in literature…

All plots stem from one master plot ie CONFLICT

What is a plot (narrative) in fiction?

According to Russian structuralist Vladamir Propp there are 31 basic functions in any tale that give meaning to any plot (narrative) and seven broad character functions. In a nutshell (according to Wikipedia), “plot is a narrative (and, traditionally, literary) term defined as the events that make up a story, particularly: as they relate to one another in a pattern or in a sequence; as they relate to each other through cause and effect; how the reader views the story; or simply by coincidence”.

Matthew Jockers (see above Six basic plots) studies a different meaning of plot than the one we conventionally understand – that is an emotional concern more than a narrative concern.

Attempts to find the number of basic plots in literature cannot be resolved any more tightly than to describe a single basic plot. Foster-Harris claims that all plots stem from one master plot ie CONFLICT or problem. He describes this in terms of what the main character feels: “I have an inner conflict of emotions, feelings…. What, in any case, can I do to resolve the inner problems?” (p. 30-31) This is in accord with the canonical view that the basic elements of a plot revolve around a problem dealt with in sequence: “Exposition – Rising Action – Climax – Falling Action – Denouement”. (Such description of the plot can be found in many places, including Holman, C. Hugh and William Harmon. A Handbook to Literature. 6th ed. New York: Macmillan Publishing Co, 1992.) Foster-Harris’ main argument is for three basic plots (which are contained within this one), described below.

“A problem is a way of creating a future. When plants grow and evolve they do so by way of problems, developing features to avoid predators, to maximise light or to retain moisture.”
Claire Colebrook, philosopher and cultural theorist

Why conflict is so appealing?
From an evolutionary perspective, conflict is its prime driver. At every level from biological to personal to social to political to cultural to environmental to the military and so on, conflict challenges individuals and groups to build progressively more effective, efficient, complex and hopefully less violent alternatives to conflict resolution. Also, novels offer a simulation of conflict and possible scenarios of a resolution.

“If you don’t like to read, you haven’t found the right book.”
J.K. Rowling

Foster-Harris in his The Basic Patterns of Plot (1959) suggests there are three basic patterns of a plot (p. 66):
1. ’Type A, happy ending’”; Foster-Harris argues that the “Type A” pattern results when the central character (which he calls the “I-nitial” character) makes a sacrifice (a decision that seems logically “wrong”) for the sake of another.
2. ’Type B, unhappy ending’”; this pattern follows when the “I-nitial” character does what seems logically “right” and thus fails to make the needed sacrifice.
3. ’Type C,’ the literary plot, in which, no matter whether we start from the happy or the unhappy fork, proceeding backwards we arrive inevitably at the question, where we stop to wail.” This pattern requires more explanation (Foster-Harris devotes a chapter to the literary plot.) In short, the “literary plot” is one that does not hinge upon decision, but fate; in it, the critical event takes place at the beginning of the story rather than the end. What follows from that event is inevitable, often tragedy. (This, in fact, coincides with the classical Greek notion of tragedy, which is that such events are fated and inexorable.)

Seven basic woman/man vs …/ other plots

Three basic plots in fiction according to Kurt Vonnegut

Listen to Nick Meaney from Epagogix address 700 US actuaries, giving an overview of Epagogix’s story and process of using algorithms and neural networks to predict which Hollywood scripts will make money and which won’t as well as how the not so good scripts or stories can be improved with the knowledge and insights they’ve collected about blockbusters.

Why reading novels is important: it improves literacy skills

Research shows that teenagers who read fiction had reading skills more than six months ahead of peers who almost never read fiction books. University College London Institute of Education analysed data from more than 250 000 teens aged 15 across 35 industrialised countries, including the UK and found that novels were much more beneficial than reading comics or magazines and it makes a big difference to their development. The reason is that novels are more challenging because they require to digest a large amount of long and continuous text and forces teenagers to switch off from distractions.

“I’m old-fashioned and think that reading books is the most glorious pastime that humankind has yet devised.”
Wisława Szymborska (more quotes about reading and speed reading)