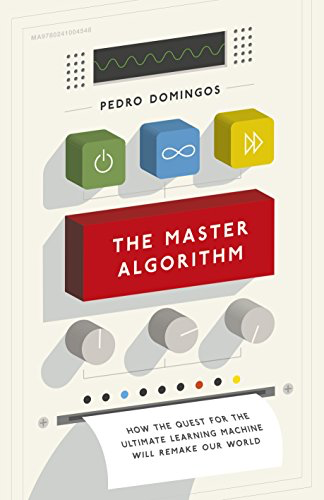 Micro-summary: the ultimate master algorithm is an algorithm (or machine learning algorithm) that can learn anything (in minutes or seconds) given enough data, especially non-linear models or phenomenon.

Everyone a coder
Currently, machine learning algorithms do two things: one, where they improve the existing processes in order to do them more accurately and faster and two, where machine learning can do entirely new things that never have been done before. For example, if you give a computer enough date about a particular health condition, it will learn in less than a minute how to diagnose a patient for that condition much better than any top doctor can do. In the future machine learning algorithms will be embedded in everything from day one, in the same way as your subconscious mind with its neural network, which works in a similar way, learns all the time. At the moment, in order to programme a computer, you need to know how to code or be a computer scientist. In the near future, anyone will be able to programme a computer without any knowledge of coding – because the machine learning is learning the natural language and will be able to understand your English or whatever language you choose to speak. You’ll just need to explain in plain English what you want your computer to do.

10 000 hours for humans vs seconds for AI
For a human being, to master something, it takes the famous 10 000 hours which is 3-hours/day for 10 years. Not for a machine learning (MI) algorithm though. An algorithm developed by researchers at Moorfields Eye Hospital in London can diagnose common signs of eye diseases to 94% accuracy and it took less than one minute for the algorithm to learn that! as opposed to 10 000 hours of human laborious training. Another algorithm developed by researchers in Los Angeles is 90% accurate at predicting suicides and again it took minutes to train itself to do it. AI is used to create art and paintings and even whole films from scratch in minutes. In 2017, AlphaZero, a software program developed by the Alphabet-owned (Google) AI research company DeepMind, self-learnt chess from scratch by playing against itself, without any input regarding the rules of the chess – in just four hours – and defeated Stockfish 8 (the world’s chess computer champion for 2016).

Another great example of the power of the learning machine algorithms is a writing software developed by Philip M Parker, which can write any book or your whole PhD in 20 minutes! I know, it’s difficult to believe – watch his TED talk.

One of the top Cassandras, among others, Yuval Noah Harari in 21 Lessons for the 21st Century predicts that soon AI might take over humans because it will be able to do everything humans do but better, quicker and more accurately, including being more conscious.

Symbolists, connectionists, evolutionaries, Bayesians, and analogizers
Pedro Domingos suggests that in order to develop the Master Algorithm different rival schools of thought need to be considered and combined and these are: the symbolists, connectionists, evolutionaries, Bayesians, and analogizers. Each tribe has identified individual problems and offered solutions but the Master Algorithm must solve all five problems, not just one. For example, one of the top analogizers, Douglas Hofstadter says that all of the intelligence is just analogy. By the way, he’s the creator of Hofstadter’s Law which states: A task always takes longer to complete than you expect, even when you take into account Hofstadter’s Law. Hofstadter is the author of Surfaces and Essences – Analogy as The Fuel and Fire of Thinking.

“If somebody describes to you the world of the mid-21st century and it doesn’t sound like science fiction, then it is certainly false. Change itself is the only certainty.”  Yuval Noah Harari in 21 Lessons for the 21st Century by Yuval Noah Harari