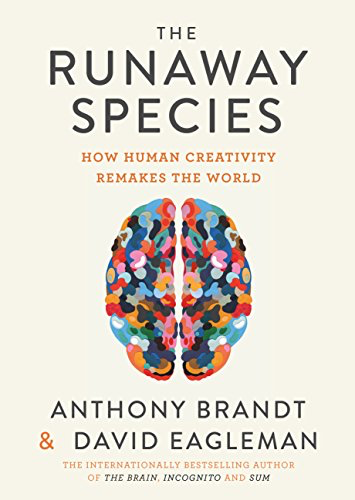 David Eagleman: So what humans do that is special is we absorb all of these ideas, all these inputs, and we smoosh them up in various ways and come up with new things.

And so there are essentially three main ways that the brain does this, and we’ve summarized this as bending, breaking and blending.

So let’s start with bending. So bending is where you take something and you change it, you make it smaller, you make it bigger, you change something about it. When you look at statues across human culture you find that people bend the human form any which way, making it taller or skinnier or emphasizing certain portions over the other. They do that with all animal paintings and sculptures and so on.

You can bend lots of aspects of things. So the artist JR made a statue of the high jumper Mohammad Idris for the Olympics and he put that super huge and had him jumping over a building. And you have other sculptures that make extremely tiny little figurines.

And one of the arguments we make is that the exact same thing that’s happening in art, the same cognitive processes are happening in the sciences also.

So you see exactly this kind of thing happening all the time. Just as an example in the early days of driving in the 1920s headlight glare was a real problem.

So Edwin Land, the scientist, realized that he could solve this by using polarizing crystals. But those were very big at the time. So he figured out how to shrink these down and make a windshield out of all these little, polarized crystals.

It’s exactly the same sort of “aha” moment as the artists who’s making these tiny figurines. It’s the same kind of bend going on. And we see this all over in biology.

Just as one example the artificial heart since it was invented in the 1980s has been a mechanical pump, but these are very energy hungry and they get worn down. And so in 2004 a couple of physicians came up with a continuous flow heart where blood flows through and is oxygenated continuously. So if you have one of these hearts you don’t have a pulse at all. And Dick Cheney has one of these, and he doesn’t have a pulse.

And so this is a bend of what we find in nature. We get the idea of the heart and then we bend it to make it compatible with what we want.

And, of course, airplanes are a bend of what we witnessed birds doing and so on. So there are many ways that you can bend things and this is one of the great things that the brain does all the time.

So breaking is where you take something, some input that you received and you bust it into pieces. Maybe you leave pieces out, or something like that.

So just as an example the artist Cory Arcangel took the videogame Super Mario Brothers and he hacked into it and he removed everything except for the little clouds. And then he made an art installation where it was just the clouds, and he called it Super Mario Clouds.

That same kind of overt creativity that happens in the arts is exactly what happens in the scientific lab all the time where you take certain parts away. For example, in my field there’s a method that’s used now in neuroscience called Clarity where you take the brain—which you can’t see inside of—and you wash away all the fatty molecules so that you can see where the pathways originate and where they go.

And in that way you can essentially make part of the brain transparent. You can suddenly see the pathways. It’s the exact same idea. Just as another example the artist David Hockney takes the visual field and breaks it up into pieces. And the impressionist painter Seurat does pointilism, so there’s these sort of big dots and you’re seeing these dots—and you come up close and you see them. If you go far away it looks like a painting.

And this exact same sort of breaking is the innovation that underlies our whole digital universe because there’s pixilation of everything you see on a computer screen. It’s a bunch of individual squares that have different colors. And at the right distance you see me talking on a Big Think video. And so breaking is something that we do all of the time.

Fred Sanger was trying to figure out how to sequence long molecules of DNA and he realized that he could break these up into smaller pieces. And then you can analyze and collate the information.

And he actually ended up winning two Nobel prizes for this work that he did and it’s the basis of essentially everything we know about genomes at this point.

But it’s all the same cognitive operations that are happening that you see both in the art and in the sciences.

What happens in the arts is overt bending, breaking and blending. So you see all kinds of art projects where people are taking things and they’re bending them in size or texture or they’re breaking them. They’re breaking pieces off or they’re blending two ideas.

This is the basis of all of the art that we see, exactly the same mechanisms are happening in the scientific lab, it’s just that typically we can’t see them.

So when you pick up your cell phone it’s this little rectangle that is absolutely chock full of creativity, of really brilliant ideas that went into the making of that. But you can’t see it because it’s just a little enclosed thing.

But the interesting part is it’s exactly the same cognitive mechanisms, which is to say, absorbing the world: bending, breaking and blending it, and spitting out new versions of things.

One of the things that we love about our computers is that we can put information in there and then when we pull it out a year later it’s exactly the same. It’s exactly the same zeros and ones. The human brain doesn’t work that way. When you put stuff in it gets smooshed up with other things that have come in before and what comes out are new versions of things.

So blending is where you have two completely separate ideas and then these become blended in the brain and something new comes out.

So just as an example in ancient mythology we see this all throughout where you have, for example, a man and a lion and you get a sphinx, or you get—all over the world different combinations of lion and a goat you get a chimera. Exactly the same thing happens in the lab.

Just as one example scientists have long wanted to harvest spider silk, which is actually stronger than steel for its size. But you can’t get a bunch of spiders together or they’ll eat each other.

So what a geneticist did is he spliced out the gene that makes spider silk and put it in a goat, and made Freckles the spider-goat who secretes spider silk in her milk. She’s a real life chimera. And this idea of taking two separate things and blending them is something that humans do all the time. We take very different concepts and we put them together.