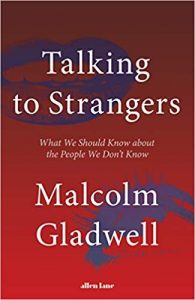 Micro Summary of Talking to Strangers by Malcolm Gladwell

At first, it looks like Talking to Strangers: What We Should Know about the People We Don’t Know by Malcolm Gladwell lacks a single zeitgeist-defining idea but nevertheless the key discussion is about communications and interactions among strangers at the individual, collective and ideological levels. “Any element which disrupts the equilibrium between two strangers, whether it is alcohol or power or place, become problematic. The book is really about those disruptive influences,” says Malcolm Gladwell.

The underlining concept is taken from Timothy Levine, the US academic who specialises in deception – the truth default theory. Levine suggests that our fundamental instinct to any new information is to believe it because we simply couldn’t function without the default to the truth (belief comes easily; doubt takes effort and time). No communication can proceed without the default to truth. On the other hand, the well-known phenomenon is that far from defaulting to the truth, we tend to believe only the information that fits our preconceived unconscious biases.

Self-help tip from the book: don’t judge people too early; delay your conclusions about other people, especially strangers who can be most likely untypical in their behaviour and difficult to read.

In sum, it looks like people aren’t totally transparent to us. Liars seem honest, spies seem loyal and nervous people can look guilty. Face reading doesn’t seem to be a reliable tool for reading people, as Hamlet put it: one may smile and smile and be a villain: “There is no art / To find the mind’s construction in the face.” This psychological phenomenon is called ‘the illusion of asymmetric insight’ where we tend to consider ourselves opaque to others while thinking that other people are easy to read. The book reminds us that strangers are not easy to read.