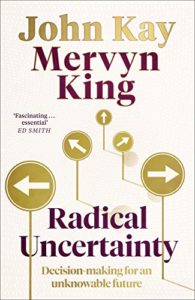 Times of radical uncertainty require a book
From John Kay (an economic professor) and Marvin King (the governor of the Bank of England), the authors of the classic handbook, The British Tax System comes an interesting and timely book with useful reminders mostly about the financial domain which can be generalised to other domains. If you might get overwhelmed by the page count (544 pages = 10 hours and 53 minutes of non-speed-reading reading) I’ve boiled it down for you to this short and practical summary on how to make decisions (their simple strategy might surprise you so if you’re already a speed reader, you know where to start getting the key message of this summary ie at the end).

For ‘radical uncertainty’ there is no way of resolving the problem. In short, there, the correct answer is ‘don’t know’. There are many aspects of ‘radical uncertainty’ such as vagueness, ambiguity, ignorance, obscurity, ill-defined issues and most of all the lack of information. It’s classical, “unknown unknowns” coined by Donald Rumsfeld, the United States Secretary of Defense who famously said, “there are known knowns; there are things we know we know. We also know there are known unknowns; that is to say we know there are some things we do not know. But there are also unknown unknowns—the ones we don’t know we don’t know.”

Another example of radical uncertainty is ‘black swans’ coined by Nicholas Taleb in his book with the same title.

“We see, but through a glass, darkly.”
Basically, what they mean by the above statement is that forecasting is difficult, even with all the available knowledge of probabilistic reasoning because of the state of being uncertain which is “not able to be relied on, not known or definite” (the Oxford Dictionary definition). When it comes to decision-making strategies, there is no general theory on how to do it best. The existing literature on decision-making frames it in terms of a puzzle-solving which is fine for puzzle-type decisions but when it comes to mystery-type questions there is little research. They suggest that a good place to start for mystery-type decisions is creativity which is inseparable from uncertainty. Examples of that approach include Sumerians who invented the wheel, Einstein who imagined riding on a beam of light, Steve Jobs thinking differently, Frank Knight and John Maynard Keynes emphasising the significance of radical uncertainty in the financial domain.

So, we get it intuitively that forecasting is hit and miss because it’s about the unknown future and there is a lot of randomness and many unknowns. My criticism of the book is that this point could have been said in less than 544 pages. Although the authors don’t mention the term ‘nowcasting’, it’s worth noting that “Nowcasting is the economic discipline of determining a trend or a trend reversal objectively in real time. Nowcasting is fact-based, focuses on the known and knowable, and therefore avoids forecasting. Nowcasting is the basis of a robust decision-making process.” Adam Kucharski, author of another timely book The Rules of Contagion: Why Things Spread – and Why They Stop nails this wise warning by saying “If you’ve seen one pandemic, you’ve seen… one pandemic.”

Puzzles and mysteries
The distinction between ‘puzzles’ and ‘mysteries’ is a very useful way of framing any problem. Puzzles are solvable problems, they have answers and solutions. Mysteries don’t. The biggest mistake, according to the authors, is that people try to reduce mysteries to puzzles through inaccurate numbers and statistics. For example, Brexit was sold to the public on such bogus, invented numbers, and the catastrophic financial impact was a result of over-reliance on dodgy numbers, as well as incompetent decision-makers, they say.

The authors offer a useful approach to navigating through mysteries. Simply, ask, “What’s going on here?” Actually, they repeat this strategic, opening, framing question, what feels like-hundreds of time throughout the book. This type of questioning is similar to philosophical enquiry suggested by a French philosopher Gilles Deleuze (who coined the concept of rhizomatic thinking which inspired us to develop rhizomapping) who suggests when meeting a mystery to ask, “What does it do?” I get the impression, that the authors’ short answer to how to take your “decision making beyond the numbers” is to ask: “What’s going on here?”

Get Radical Uncertainty: Decision-making for an Unknowable Future by John Kay and Marvin King