Summary of DRACULA by Bram Stoker

Story Overview
Though the Eastern European countryside was lush and verdant, lawyer Jonathon Harker felt uneasy. As he traveled to resolve a problem with a client’s estate, he had met with several warnings to, frankly, stay away from his destination: the castle of Count Dracula, a Transylvanian noble. Others had even gone so far as to slip him a clove of garlic or small crucifix – talismans, they said, to ward off evil.

Jonathon himself had dismissed these admonitions as nothing more than rampant superstition. But as he neared the castle, the sky let loose a torrential downpour. The Count’s gaunt coachman appeared and offered Jonathon a ride to the castle. He accepted gratefully, but the warnings echoed in his mind as the coach was followed closely by an eerie blue flame – and a pack of howling wolves.

Jonathon’s discomfort grew the moment he was introduced to Count Dracula. His host possessed a strong face – “aquiline, with high bridge of the thin nose and peculiarly arched nostrils. … The mouth … under the heavy moustache, was fixed and rather cruel-looking, with peculiarly sharp white teeth; these protruded over the lips, whose remarkable ruddiness showed astonishing vitality in a man of his years …”

The Count was as cultured and polite as any noble person, but Jonathon couldn’t quite shake the vague impressions of strangeness – impressions that were reinforced when the visitor noticed that when the Count passed in front of a mirror, no reflection passed with him. Gradually, unease swelled to a dull, aching fear.

Later, Jonathon awoke to the sounds of scraping and scratching. Taking a candle into the hall, he gasped when he saw Dracula climbing down a wall – headfirstIn horror, he watched the Count scale the wall, then disappear into the shadows. Choking back a scream, the lawyer ran down the hall, desperate to escape the madness that surrounded him.

The first room he encountered happened to be the Count’s. A breeze whispered the curtains covering a small window on the far wall, indicating it was open. Jonathon quickly climbed through the window – only to find himself in an even stranger place. He stood in the freshly-dug and furrowed courtyard of a small, ruined church; he could see the crumbling walls in the weird half-light that filtered down from overhead. He became aware of coffin-shaped boxes, filled with rich black earth from the church’s cemetery. Each was stamped with a shipping label.

Jonathon troll-walked between the rows of boxes, his eyes darting furtively left and right. He froze in his tracks when he saw what appeared to be a body lying in one of the boxes. Jonathon’s breath caught in his throat when he realized the body was that of the Count. The unnaturally pale Dracula was lying perfectly still, his sightless eyes staring into eternity. Jonathon cracked the corpse on its head with a shovel he found nearby, then sprinted away from the castle.

Meanwhile, back in England, Jonathon’s fiancée, Mina Murray, took a trip to the seaside town of Whitby to celebrate the engagement of her friend Lucy. While she was there, a Russian freighter crashed into the Whitby pier during a furious storm. Dockworkers reported seeing a large dog jump from the ship during the accident. The only crewmember found on board was the captain – dead. The ship’s log told of disappearing crewmen, and an unnamed horror that drove the captain to tie himself to the ship’s wheel, clutching a rosary to ward off the evil. The cargo manifest listed 50 boxes of earth, which had been picked up and spirited away by a Whitby businessman.

A couple of days later, Mina awoke to find that Lucy had wandered off during the night, apparently sleepwalking. Mina found her friend in a church’s cemetery; a dark figure with a white face and red eyes hovered over the hypnotized girl. As Mina approached, the specter disappeared, and Lucy fell over as if in a coma.

A few days later, Lucy had regained her strength, and Mina received word from Jonathon that he had been ill and was recovering in a Budapest hospital. Mina immediately made plans to join him there, where they were married right in the hospital room. 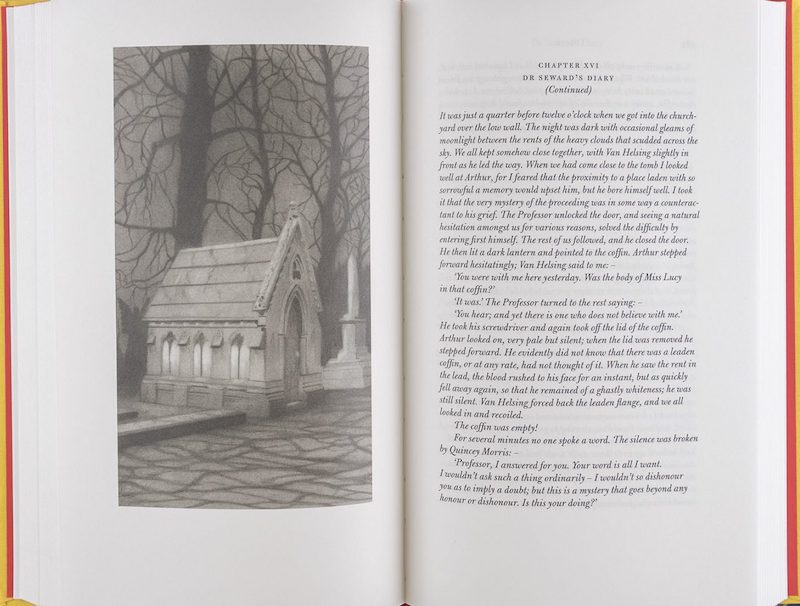 When Lucy moved back to her family’s home in London, she relapsed into her illness, and her fiancé, Arthur Holmwood, asked Dr Seward, the director of a local asylum – and Lucy’s former suitor – to attend to her. After examining the girl, a mystified Seward called in his former professor, Dr Van Helsing, for another opinion. It was obvious Lucy had lost a lot of blood, but transfusions had little effect. In fact, her condition worsened until she was barely clinging to life. Arthur and his friend, Quincey Morris, both donated blood, but poor Lucy died the next day.

Alarmed at the symptoms Lucy presented, Dr Van Helsing forbade Arthur from kissing her as she lay dying. And after she was dead, the doctor laid a cross and a clove of garlic on her body, which was buried in the family crypt.

Later, Dr Van Helsing contacted Mina to find out if she could shed any more light on the mystery of Lucy’s death. Mina presented the doctor with her diary, which recounted the peculiar scene in the cemetery. She also gave him a copy of Jonathon’s diary, which detailed his own harrowing experience in the Count’s castle.

With solid evidence that Dracula was indeed a vampire, and fearing that Lucy also had been made into an immortal monster, the doctor, along with Quincey and Arthur, raced to her tomb, but found it empty. Seemingly out of thin air, a hideous – yet frighteningly sensuous – creature appeared before them: Lucy. “The sweetness was turned to adamantine, heartless cruelty, and the purity to voluptuous wantonness … the lips were crimson with fresh blood.”

The men lured what had been Lucy into the vault, sealing the tomb with crumbs of Host – sacramental wafers. The next day, they returned and destroyed the creature. After filling her mouth with garlic, they vowed to hunt down the evil that had corrupted the unfortunate young girl.

The three friends joined with Seward, Jonathon and Mina for their questPutting together all the information they had between them, they learned that vampires could appear in any form, but could only transform at sunrise, sunset, noon or midnight. They also realized the earth-filled boxes had been delivered to the house next door to the asylum. The hunters resolved to find the Count’s boxes and sterilize them with the Host so he could not find refuge there. Suspecting that Dracula would be looking for Jonathon and Mina, they told the couple to stay under cover. Mina, they said, was “too precious … to have such risk.”

Leaving Jonathon and Mina behind, the others explored the house next door. There they found thousands of rats scurrying between boxes of soil, all amid a stench “as though corruption had become corrupt itself.” Realizing the vampire was close – and that Mina and Jonathon were alone – the men rushed to their room, only to find the Count forcing Mina to drink his blood from an open vein in his chest, while Jonathon lay in a stupor. Brandishing a sacred wafer, they advanced on the vampire, who, sickened by the relic, vanished in a cloud of smoke.

Van Helsing approached Mina and touched her forehead with the Host; it burned a scar into her flesh. Realizing she had become unclean, the crusaders vowed to kill Dracula before Mina became like him. If they failed, they also vowed to drive a stake through Mina’s heart rather than let her turn into a blood-seeking monster.

Van Helsing hypnotized Mina, and through her unholy spiritual tie with Dracula was able to learn that the vampire was aboard a ship. The destination yet eluded the doctor, although he knew it was somewhere in Europe. The crusaders paired off, planning to hunt the entire continent until they found him. Van Helsing and Mina volunteered to travel to Transylvania in case Dracula had returned to his homeland. The others agreed to meet them there if their own searches proved unfruitful.

Mina, for her part, began to grow more vampire-like with each passing day: she slept all day, refusing to eat, and was terrorized by the Holy Host that the doctor used to protect her. One night, as they neared the castle, Mina was visited by three ghostly personages – Dracula’s brides. Calling in haunting, chanting voices, they begged Mina, as their “sister,” to join them. Van Helsing chased them away, but could not drive their deadly, alluring voices from his mind.

The next day, trudging through the grave-like stillness of a heavy snowfall, Mina and the doctor reached the castle. Immediately, they encountered the three brides lying in their tombs. Even in stasis, the brides evoked smoldering seduction. Van Helsing found himself being drawn in by their awesome power, but at the last minute, he drove a stake through each of their hearts, saving himself.

Hearing a commotion outside, Mina and Van Helsing noticed a small band of gypsies hurriedly carting a coffin-shaped box toward the castle. As the noisy group approached, Van Helsing saw four figures rushing through the snow trying to catch up to the gypsy band. Gradually, the doctor recognized the figures as Seward, Jonathon and the others. He would later learn that they had been following the gypsies – Dracula’s disciples – since they offloaded the vampire’s coffin from the ship. These evildoers hoped to intercept the four dauntless crusaders before they reached the castle to prevent Dracula from being able to awake at sunset.

Outside the castle gates, the four crusaders caught up with the gypsies. In the short battle that followed, Quincey was mortally wounded, but they were successful in prying open the coffin’s lid.

Just as the sun shed its final rays, Jonathon sheared through Dracula’s throat with a great knife as, concurrently, Quincey plunged his knife into the Count’s heart. Dracula’s face, in the brief moment before it, along with his body, dissolved into dust, took on an expression of utter peace. Then, as Quincey faded into death, he gazed into Mina’s eyes, her forehead now completely cleansed of Dracula’s mark.

Commentary
Bram Stoker’s Dracula is a story that has meaning on several levels. On a superficial plane, the novel is a good, scary yarn about vampires and evil monsters. On another, it is a typical religious allegory of good against evil. On still another, Stoker’s views come across as perhaps ahead of their time. The author seems to be saying that men spend their entire lives seeking unrepressed physical passion from liberated females, but when it happens, they are afraid of it. They then seek to control it, resulting in its repression, which ultimately and inevitably ends in female oppression.

Dracula is smooth, eerie reading. It also is great, if subtle, cannon fodder for the feminist movement.
Summary from: Passing time in the loo, Volume 3

This most famous of vampire stories is revived through a series of beautiful pencil drawings by illustrator James Pyman. For this new edition of Dracula, designer John Morgan worked in collaboration with the artist, who sketched a line or phase from each of the book’s 27 chapters.

Rate this post
Posted in summaries of books.
7ads6x98y