Summary of Errornomics by Joseph Hallinan and why we make errors and what we can do to stop them. 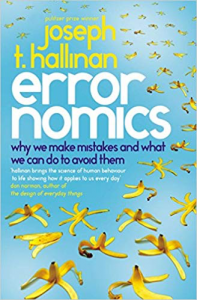 Errornomics: Why We Make Mistakes and What We Can Do To Avoid Them

Hallinan began working on this book by collecting cuttings involving human error. ‘Some were funny, some were tragic. There was one from Britain where people had ransacked the home of a baby doctor because they had mistaken the word paediatrian for paedophile.’

So why do we make mistakes? According to Hallinan, an assumption is the mother of all cock-ups. “People have a poor understanding of how perception works and they tend to think it’s more foolproof than it is actually the case. In certain forms of perception, there are consistent, provable, biases and those biases predispose us to making errors.” A good example of this is taking exams. The perceived wisdom is to go with your first answer because it’s most likely to be right. In fact, academic research form past 80 years has shown the opposite to be true. It’s much better to go with your second guess but people don’t do that.

1) Make a list.
A leading medical journal recently reported that when surgeons used a pre-surgical checklist, the death rate from surgical error plunged by 47%.

2) Second-guess
Most people think it’s smarter, when taking a test, to go with their first instinct. Don’t. Most people who change their answers usually improve their test score.

3) Write it down
Our memory automatically distorts our recall of past actions, making them seem more favourable. For example, college students consistently remember their school grades as being much better than they actually were.

4) Get some sleep
A study found even moderate sleep deprivation can have the same hazardous effects as being drunk. People who drive a car after being awake for 17 to 19 hours performed worse than those who with a blood alcohol level of .05%.

5) Do less
Multitasking is a great way to make mistakes. What will your boss be more concerned about, taking your time or getting everything wrong?

Buy the book on Amazon.co.uk