Vape is The Oxford Dictionaries Word of the Year 2014
Choosing the Oxford Dictionaries Word of the Year is a task that begins almost as soon as the previous year’s word is announced. In 2013 the choice was selfie, and as soon as 2014 began, Oxford Dictionaries staff started collecting words that might come to prominence throughout the year. Read about the runners-up to the Word of The Year 2014 which are: bae, budtender, contactless, indyref, norm core, slacktivism. Well, more words for you, since we encounter at least 100,000 words a day. More top words of the decade for you (from 2009).

Oxford Dictionaries Online defines word as “a single distinct meaningful element of speech or writing, used with others (or sometimes alone) to form a sentence and typically shown with a space on either side when written or printed.” 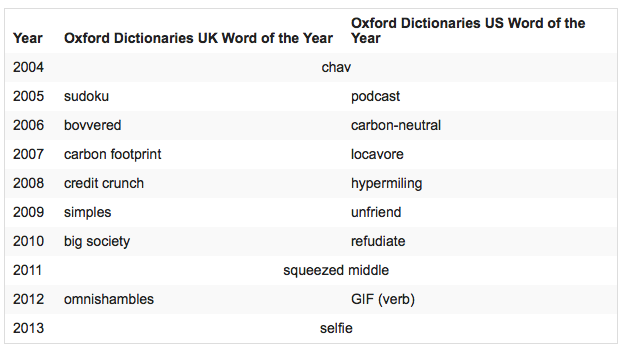 0.2 – the time in seconds taken by the brain to identify a written word.

Readers nominations
In 2006, Merriam-Webster added a novel idea. Readers could nominate candidates and subsequently vote on the Word of the Year – in an effort to instill a quantitative exercise with qualitative feedback, (or it was just good marketing). The winner, by a five-to-one landslide, was truthiness: “truth that comes from the gut, not books”, a word comedian Stephen Colbert coined on the debut episode of his Comedy Central show, The Colbert Report. In an Information Age driven by round-the-clock news, ranting talk radio, and editorless blogging, truthiness captures all the incidental, and even intentional falsehoods that sound just truthy enough for us to accept as true. If you want to know more about what truth is or might be – watch Lee Smolin talking about truth and scientific discoveries on Closer to Truth Channel

4.6 / 5 ( 7 votes )
Posted in #1 Blog On Speed Reading & PhotoReading, Summaries of Books, Good Books to Speed-Read, News, Research On Speed Reading, Vocabulary and tagged The Oxford Dictionaries Word of the Year 2014.