Summary of Does your Family Make You Smarter?: Nature, Nurture, and Human Autonomy by James R. Flynn 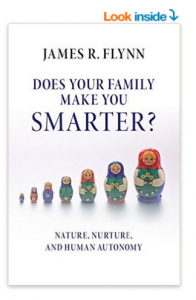 Summary of Does your Family Make You Smarter?by James Flynn

James R Flynn in his book ‘Does your Family Make You Smarter?: Nature, Nurture, and Human Autonomy’ states that “Intelligence has always been thought to be static. However, the new evidence shows that this is wrong. The brain seems to be rather like a muscle – the more you use it, the stronger it gets. That means you can upgrade your own intelligence all through life.” And your environment, especially your family plays a big part in it. This summarises the whole premise of the book, ie you can improve yourself and your IQ, and the surrounding environment has a significant effect on your intelligence.

Flynn suggest several ways to boost your intelligence and IQ:
1) Marry someone or have a relationship with someone cleverer than yourself (the downside is, of course that their IQ can get lower – read below)
2) Find an intellectually challenging and stimulating job/career/vocation
3) Socialise with bright and intelligent people (such as speed readers)

We would add:
4) read good books or better still speed read good books. Intelligent, interesting, wise and stimulating books will have a positive effect on your intelligence too. Read summaries if you don’t have time to speed read books

It all makes sense. Flynn (see the Flynn Effect) suggests that stimulating, challenging and diverse households or workplaces can boost IQ of family members or staff by several points. As an environmental psychologist, who’s been interested in optimising environments for learning, I would agree. Research from environmental psychology suggest similar findings. Different environments will boost or lower our natural abilities to learn. Studies from extreme environments such as impoverished orphanages or dysfunctional families suggests the same. Flynn states the same, a lack of stimulation, a dull home or workplace will lower your IQ.

Other key points:
• Flynn banishes ‘post-twin’ pessimism, the notion that by the age of seventeen, people’s cognitive abilities are determined by their genes.
• The book shows that family environment is potent enough to cause injustice and that adult environment is potent enough to allow people to upgrade their cognitive skills.
• Flynn proposes a new method of estimating family effects by age on a range of cognitive abilities.

Heuristic: the brain is like a muscle in its plasticity but organized like a system that is both decentralized and federal.

He said in a newspaper interview: ‘As you leave childhood behind, the legacy of your family diminishes but the game is not over – a large proportion of your cognitive quality is now in your own hands. ‘You can change it yourself and your IQ can vary through life according to your own efforts.v‘So even in your late twenties and beyond your IQ is very much your own – you can control it and upgrade yourself.v‘So going through life feeling your childhood is holding you back is misunderstanding how much power you have to improve yourself.’

The Flynn Effect
James R Flynn, is the psychologist who previously discovered a long-term increase in the intelligence of populations – a phenomenon called the Flynn Effect – in 1930 and has resulted in an average IQ rise by three points a decade since. This is suggested to be related to a combination of factors such as better education, better nutrition and a more complex and rich world that is more intellectually stimulating and challenging. A recent study (from the University of Edinburgh) suggests that intelligence is also linked to good health, which means that intelligent people are less likely to become unwell or develop illness or even die early. The discovery suggests that the same gene variants that make people bright, also protect them from diseases.

You can purchase the ebook of Does your Family Make You Smarter?: Nature, Nurture, and Human Autonomy by James R. Flynn on Kindle

Top tips for improving your state for speed reading and learning