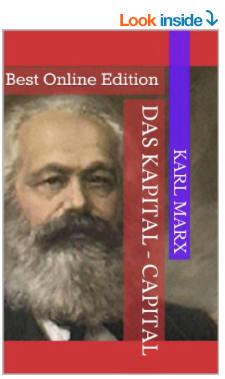 2017 and Das Kapital is in vogue again, as modern Marxists try to keep the revolution permanent. Since the financial crash, people’s thinking has changed and they are trying to understand if the capitalist system is going to destroy itself. Former Greek financial minister Yanis Yaroufakis, has described himself as an ‘erratic Marxist’ and Jeremy Corbyn described Karl Marx as a ‘great economist’ and even the shadow chancellor John McDonnell suggested that there was ‘a lot to learn’ from Marx’s most famous work, Das Kapital. Read this short summary of this classic to join the conversation…

Summary of Das Kapital by Karl Marx
In the mid-19th century when Karl Marx wrote Das Kapital – an exhaustive work of more than a thousand pages – factory conditions were often intolerable, wages were at best barely adequate, and there were few groups or governments who advocated reform. Therefore, Marx took it upon himself to define “Capitalism,” explain and condemn Capitalist methods, predict the inevitable doom of the system, and issue the rallying cry “Workers of the world, unite!”

When Marx simply describes what he sees, his analyses and criticisms appear most lucid. In contrast, his theories become confusing as he attempts to prove even the vaguest point using mathematics. He felt that these elaborate equations and proofs were necessary because his book does not purport to be merely a moral prescription for society’s ills, but a scientific description of the unavoidable course of history. It is, of course, actually not only a “prescription” but a passionate exhortation.

In any case, some of Marx’s words still ring true; as a framework for analyzing the historical transformation of human society, Das Kapital succeeds quite well.

Marx’s work draws heavily on the dialectical theories of Georg Hegel, an earlier 19th-century German idealist-philosopher. Hegel had posited that the world was in a constant process of transformation from lower to higher orders of existence. Each new order, he thought, emerged as an embodied idea, or “thesis”; and each thesis carried within itself the seeds of its own destruction – its own opposing force or “antithesis” (a “we-have-met-the-enemy-and-he-is-us” concept). But out of the inevitable clash between thesis and antithesis, a new and more perfect order – the synthesis – was destined to emerge (as Christianity, as an example, had risen triumphant from the struggle between Greek and Hebrew thought). In its turn, then, this synthesis would now function as a new thesis, engendering another antithesis and advancing the conflict-resolution cycle, until finally history fought its way forward to the ultimate synthesis – the “total realization of the world spirit.”

For religious disciples of Hegel, all this was tantamount to the coming of God’s kingdom on earth; but for Marx (who admired Hegel’s thought but despised religion as a tool of oppression and dismissed idealism as “unscientific”) it was a challenge to ground Hegelian dialectic in the down-to-earth materialism of economics – which Marx saw as the engine of history.

The inherent tension between social classes under different economic orders has created both conflict and progress through the ages, he pronounces. Most recently, the emerging merchant-capitalist class that arose to service feudalism was broken down, as merchants overwhelmed their masters; it is this merchant class that rules today. But now, says Marx, is the hour for the “ultimate synthesis” – the Proletariat revolution and the final achievement of a classless and stateless society.

Book overview
To understand Marx, we must first establish some basic definitions:

commodities Things to be bought or sold.

use value Capacity to satisfy wants (to be “used” or “useful”).

exchange value Price. (Distinguished from “use value” in that a society may value an article, yet not be accustomed to exchanging it.)

value The “socially necessary” time needed to produce a commodity.

surplus value Profit or land-rent; the sine qua non of Capitalism, created when the value of a day’s labor exceeds the exchange value of “labour-power.”

capital The surplus value that is invested in labor power and means of production (machines, plants, raw materials, etc.).

labor power The capacity or opportunity to work.

labor power (in Capitalism) A human commodity; work sold by a laborer to his “owner”-boss at less than the exchange value of labor produced.

money A valuable, produced commodity (gold, silver, etc.) employed as a universal equivalent for values of other commodities.

Proletariat The working class; propertyless wage-earners (who must remain propertyless for Capitalism to work, argues Marx).

Bourgeoisie The Capitalist class, who – not acting with intentional evil, but as “capital personified” – serve as puppets of the system, exploiting the Proletariat.

Marx points out that “the circulation or exchange of commodities in itself creates no value.” So, the trick the Capitalist must perform, in order to exact his profit, is “[to obtain] from his commodities a greater value than that invested by him in them. …”

Capitalist-Laborer Relationship
Capitalistic society provides three main sources of “income”: (1) Capital (which “profits” the Capitalist); (2) Land (which provides landowners with rent); and (3) “Labour-power” (which earns the worker his wage).

A laborer is, in a sense, a merchant, who sells his “labour-power” as a commodity. And “the value of labour-power is the value of the necessaries required to sustain its proprietor.” Thus, the Capitalist purchases a laborer’s work in exchange for a wage, which the worker then converts into food, shelter, and clothing – on the surface, a fair exchange. Because the Capitalist must make a profit, however, and the simple exchange of commodities does not produce any profit, Marx asserts that the Capitalist is forced to extract his profit from the labor of his workers; he must “lower … the wages of the labourer below the [true exchange] value of his labour power.”

Profit can be increased by various means, the most common being “simply … prolonging the duration of the working day” – paying the same wage for more work. (Today, of course, this tactic would not be tolerated.) “More intense utilization of labour power” and the emergence of large-scale cooperative enterprises (with various hierarchies of merchants and managers) has subjected the Proletariat to a “serfdom” of wage-slavery, claims Marx.

Capitalist Methods
Manufacturing by machine gives the Capitalist an added advantage and further converts the worker into a “crippled monstrosity,” cut off from the chance to cultivate “human” skills as an artisan or craftsman. (The garment worker in a factory doesn’t make suits; he sews 127 shoulder seams every two hours.) What’s more, technology tends to be self-generating, ie, machinery begets more machinery. In the textile industry, for instance, the revolutionary spinning wheel prompted the demand for weaving machines in order to cope with the increased availability of threads and yarns. In turn, these spawned the “mechanical and chemical revolution that took place in bleaching, drying, and printing” of fabrics. While these innovations in themselves were good, under Capitalism they displaced many skilled textile workers and forced them into less skilled, lower-paying positions, vulnerable to be used and discarded as interchangeable cogs in the labor machine itself.

The use of machinery also undermined the wages of working-class males. The design of machines in Marx’s time often demanded that workers be small and /or slim. “The labour of women and children was, therefore, the first thing sought for by Capitalists. …” (An added bonus was “the docile character of women and children.”) And with more members of a family working, subsistence wages for each worker could be gradually lowered. As labor-power became cheaper, the perceived value of individual workers was further diminished, fostering a cavalier disregard for their safety, health and comfort in the grim factories and workshops of the day.

A machine allows for round-the-clock use. “The longer a machine works, the greater is the mass of the products over which the value transmitted by the machine is spread, and the less is the portion of that value added to each commodity.” The machine running at full capacity day and night will probably wear out sooner, but this is desirable because more profit can thus be extracted before it becomes obsolete. Thus, it is only the worker who wears out ahead of time – and he can be replaced at no extra cost from the ranks of idle and hungry workers who have been displaced by machines – the “reserve army of unemployed.”

Capital and Surplus-Value
“… During the periods of stagnation and average prosperity,” this group of excess workers “weighs down the active labour-army [ie, acts as a brake against wage increases]; during the periods of over-production and paroxysm, it holds [the] claims [of the active labour-army] in check. Relative surplus-population is therefore the pivot upon which the law of supply and demand of labour works.”

Improved manufacturing and farming methods, the proliferation of banks and loaning practices, increased ease of global transportation and travel, says Marx, all have helped swell the Capitalist tide of expansionism and exploitation. The complex and selfish industrial society, he declared, was now ripe for revolt.

Summary
Throughout the last few centuries, according to Marx, it has been the common worker’s fate to suffer the “maximum of working time and the minimum of wages” in order to supply Capitalists with profits. “Accumulation of wealth at one pole is, therefore, at the same time accumulation of misery, agony of toil, slavery, ignorance, brutality, moral degradation, at the opposite pole.” This must and shall be ended.

Granted, says Marx, the Capitalist is in tight control. But the pendulum of power has swung many times in the past, and he promises that it will again shift. The Proletariat, under the banner of Communism, will ultimately be victorious. Revolution is the destined scenario – and the ultimate historical “synthesis” will be a perfectly just and egalitarian society, where everyone works “according to his ability” and receives “according to his needs”; where the state itself finally “withers away.”

Top collection of summaries – Passing Time in the Loo Volume 1, 2, 3 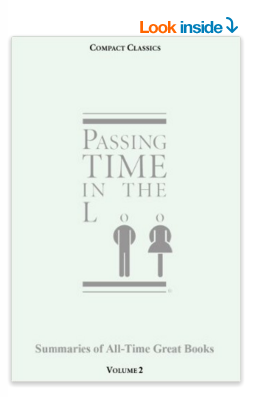 Book Summaries: Passing Time in the Loo – 150 summaries of classincs