Do we read less in recession? Publishing has suffered in the downturn, though not as much as one might think. In fact, over the past eight years, the umber of books bought in the UK has risen by nearly 50 per cent to just under 240 million. Adult non-fiction – now makes up 40 per cent of the sales, eclipsing fiction, which accounts for just 30 per cent (the remaining 30 per cent is accounted for by children’s books). In the graphic below, each full-sized book represents about 225,000 books purchased, meaning that in 2007 – our tallest shelf – the nation bought just under 23 million books across the genres selected. Some of the trends are clear. Su Doku – in “Puzzles” – catapults into the mainstream in 2005. Celebrity chefs continue their rise. Biographies and autobiographies spike in 2006, mostly because a lot of high-profile names among them Gordon Ramsey, Sharon Osbourne and Steven Gerrard – had books published. Then there are the small victories, such as Does Anything Eat Wasps?, a compendium of New Scientist columns, which in 2006 almost single-handedly increased sales of popular science books by 50 per cent. 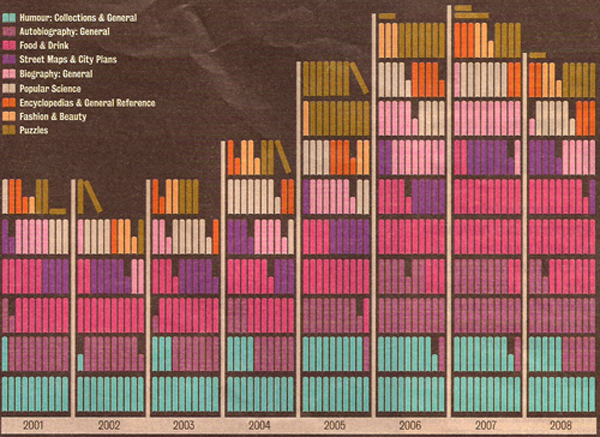