This has been used as a punishment in schools since Victorian times. But the original purpose behind ‘Dunces’ was to help pupils to learn better. 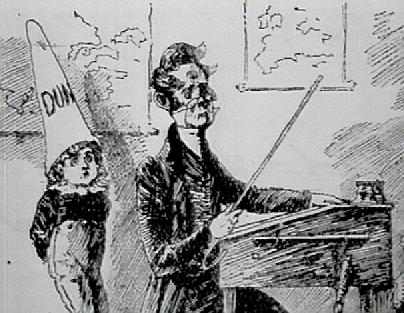 The dunce cap can help with concentration

In the 13th century, a Franciscan monk and philosopher and theologian of great repute, John Duns Scotus (from the village of Duns in Scotland), developed a ‘duns cap’ to be worn by children who needed something to help them focus. Detractors of Scotus made fun of the cap. Over time the ‘dunce’s cap’ came to be associated with ‘stupid’ children or someone who is slow at learning, and was eventually misunderstood and used to stigmatise and make fun of such children. Most recently, when Ron Davis was working with children diagnosed as dyslexic, he discovered that asking the children to concentrate on this point was enough to allow many of them to start reading (see his book ‘The Gift of Dyslexia’).

How do we know about this point?

First think about this question: What do the following have in common? Dunces, wizards, saints,  yogis. All (originally) knew the importance of focusing on a point above and behind the crown of the head in order to enhance their ability to concentrate and be fully aware. This point has been well known for many years. It is depicted as a halo in many pictures of Christian saints, yogis know it as the 8th chakra (which gives access to universal wisdom), and witches and wizards wore a hat which reminded them to focus on this point in order to enhance their magic powers.

In speed reading and photoreading this point of concentration is used to help to get into a better state for reading faster and understanding more. It also helps to open the peripheral vision which helps to see more text on a page.